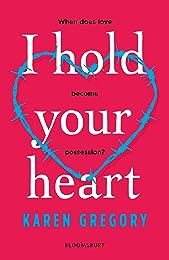 This starts off as a traditional ‘boy meets girl and falls in love’ story – it is a tale of love at first sight, as Gemma falls in love with a boy a few years older than her. He has a car, and money and can shower her with gifts. As time passes, her family and friends start to notice how controlling Aaron is, but when they try and discuss it with Gemma, Aaron persuades her to cut communication with them.  Gemma thinks they aren’t being supportive and gradually shuts them out of her life, isolating herself and leaving her open to Aarons manipulative ways. She moves in with him and her isolation is complete, and it is only then she begins to realise how controlling Aaron really is.

Gemma’s family dynamics is very interesting in the book, and makes you wonder if this relationship has contributed to her current situation. We see how her brother’s football training appears to take priority, leaving her feeling inadequate and forgotten.

Interestingly, we see a little of Aarons viewpoint and the reader is able to see how he can view the relationship as acceptable, even though the reader knows otherwise.

This is a powerful story and one that will resonate with many people. It is an honest depiction of how you can gradually lose control of your relationship, until you are too deep into the relationship to extradite yourself. It is an emotional book that teens will be able to relate to. I enjoyed this book and would recommend it to students in my library, especially those vulnerable to similar situations.

This book is set in a dystopian world – rising sea levels have flooded the UK and a wall has been built around the capital to protect ‘the rich folks of the city’ – an elite group of society. This is surrounded by the Shanties, ‘a floating scum clinging to the outside of the Wall’ where its i struggle to survive. Here, society has set its own rules and resentment builds against those protected by the Wall.
We meet the two main characters of the book, Joe and Kara, when they are diving for artefacts in the grimy waters surrounding the Wall. Joe finds a small metal bear that he takes back to the surface. The bear travels with him throughout the book, gradually becoming more beleaguered as the novel progresses and the two teenagers fight to build a better future. They hear of a terrorist attack, resulting in a James Bond style adventure story, including a stolen submarine, secret tunnels and a bomb. In true Bond style there is a definite theme of good vs bad, although this is tipped on its head as you carry on reading.
There is a lovely reference to how a future world would comprehend ours, when they struggle over a ‘treasure map’ consisting of wiggly lines. It is only later in the book, the reader learns it is a map of the London Underground!
FloodWorld is a fast-paced adventure book filled with gritty realism, a feisty female protagonist and strong bonds between friends. I enjoyed reading this book and would recommend it at school, but I am undecided with an age group recommendation – I feel the language is aimed at 9-12 year olds, but there are a few moments that this group may struggle with, such as the description of a mangled face in a fire as Cortez burns to death, but I may just be ultra-sensitive! There is a dystopian feel to this book, and I think fans of ‘The Hunger Games’ would love it. 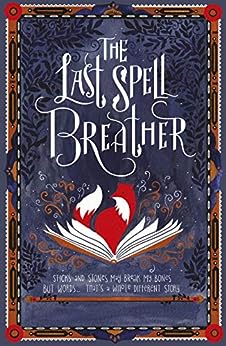 Rayne is a spell breather, like her Mother. They can breathe the words from a spell and bring it to life. It is what keeps their village, Penderin, safe and protected from the world outside its borders. However, Rayne is a reluctant student and hates that she must inherit her Mother’s role.

One day, the spell surrounding Penderin is broken and her Mother disappears. Rayne adds to the villages woes by attempting to cast a spell which only worsens the situation. She realizes she must leave the village to look for her Mother, and taking the spell book, she heads off with her friend,Tom. She enters the citadel and encounters a magical world ‘smelling of lavender and tea leaves’.

The writing in this book as well as the story itself, are beautiful, and this has all the trademark features of a fantasy story with a map, monsters, magic and the timeless battle between good and evil. The opening lines had me hooked – ‘The spell wouldn’t stay on the shelf. It bounced on the floor and rolled under the table’ Who could resist reading on?

The language is delightful, conjuring up a magical world and its surroundings perfectly. I loved this book and will definitely be recommending it to students at school when we return!

Good Morning, from a very hot and sticky Kent! I have just finished reading ‘The Vanished Bride’ by Bella Ellis – a historical mystery set in Yorkshire in 1845. It is the first of The Bronte Mysteries, and there are references to the sisters scattered throughout the book, including a guest appearance of their brother, Branwell.

The book opens in a blood soaked room with a missing occupant – Elizabeth Chester. The sisters hurry over to investigate, having heard of the situation from their friend, Mattie, who works at the house.  Mattie adds background information on the residents as well as briefly coming under suspicion of the murder itself. She hints at the husbands violent temper and as the sisters learn more about Chester’s background, the case against him builds.

This is a twisty mystery and every time I thought I had the ‘murderer’ nailed, something else popped up to throw me off course. I had suspected everyone by the middle of the book!

I loved the relationship between the sisters; the childish fights, the one-upmanship but also the confidence they had in playing to each others strengths and their companionship.

This was a feel good cozy mystery with literary references scattered throughout and I would highly recommend it as a holiday read. Fingers crossed for more in the series…. 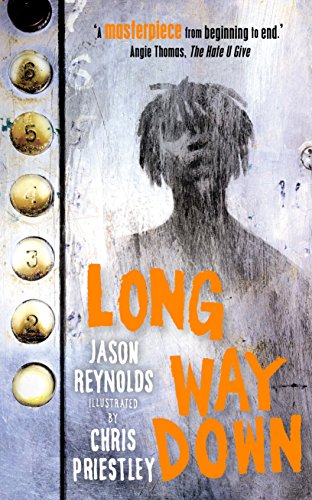 This is the best book I have read this year!

I read this book as part of the Carnegie Awards, and I have to admit I wasn’t overly enthusiastic about starting it. It is written in free verse, which is something which has never really appealed to me….however, I loved this book!

It is a very short book, and quick to read. The rhythm of the verse and the tense, emotional story propels you to the end of the book. It has such a strong, raw, message that the impact stayed with me, long after the book had been finished.

The overall theme of the book is one of  revenge, passed down through generations and strengthened through the community they live in.

Will, the protagonist of the story, sets out from his flat. He plans to kill someone in revenge for his brothers’ death – he know ‘the rules’. He lives on the 7th floor and the entire book is set in the lift as it travels from his floor to the ground. As it descends, pivotal characters enter the lift on each floor. These characters are all ghosts from Will’s past and it is a sad reflection on a young man’s life that violent crime has had such a huge impact. He has a chance to step out of the cycle of revenge but the reader can see how hard a decision it is for Will as he descends.

As I have already mentioned, this book is a quick read, but the emotional impact it has, is phenomenal. I would highly recommend reading this book.

Book was donated by Faber & Faber

At the start of the book, we are introduced to a government run recovery system called The Program. This has been set up in response to an epidemic of suicides. Teenagers are picked up if they show any signs of depression and taken to be ‘cured’. Many of their memories are wiped and when they are deemed well enough, they are returned home, where they are supported by specially trained handlers, to help their return into society as happy, well rounded young adults.

The key characters have witnessed the return of several friends after their treatment and realise that it is not always a positive outcome. In order to try and avoid The Program, Sloane and her boyfriend, James, struggle with the reality of their teenage lives. Sloane, the protagonist of this series, has lost her brother to suicide, witnessed by both herself and James. Inevitably, first James and then Sloane are enrolled in the Program. She is devastated when James no longer seems to remember her on his return and when Sloane also finds herself enrolled in the system, she expects the worse. There is a glimmer of hope when she meets Michael Realm and her handler, Kevin. Both of these characters will play larger roles as the novel proceeds.

I love YA dystopian books and, after reading the blurb and realised romance was involved as well, I was expecting to be enthralled with this book. Whilst I enjoyed it and have bought the second in the series, I am not racing to read it. It was good, but not fantastic, a strong 7 out of 10. I spent most of the book wanting a little bit more than it delivered! I found the characters a little bland, the conflicts within the book, a little insipid. This led me to build few connections with the characters and if I am honest, I didn’t really care what happened to them, as I found them fairly one dimensional. Their backgrounds and thoughts were never fleshed out enough, leaving me with with little empathy for them! Fingers crossed this will be rectified in the second of the series….

All the Hidden Truths by Claire Askew

This is a book about a school shooting: a teenage boy walks into Three Rivers College and shoots 13 young women dead. He then turns the gun on himself.

This shocking event happens at the start of All the Hidden Truths, and the remainder of the book tries to sort out the emotions and anguish surrounding the shooting as well as try to figure out why Ryan Summers was driven to do such a thing.

There are several female lead characters that play key roles in the book:

Ishbel, Abigail’s mother – Abigail was the first girl to be shot at Three Rivers College

Moira, the mother of the shooter, Ryan Summer

DI Birch, policewoman in charge of the case

They have very different roles in the book and consequently offer different aspects of the shooting. It is through these women that the story unfolds separately, until they finally meet at the conclusion of the book

Some of the story is told through the medium of social media such as tweets, emails or newspaper articles and it holds the press to account. It illuminates how the shooting has effected the community and in turn, how it has responded. I think this aspect adds to the edgy, harrowing feel of the book

I am not sure I would have chosen to read this book on the sunny Sunday morning, I did as it is fairly grim both in subject matter and narrative. However, it turned out to be a compelling read that I finished in one sitting.